Where the esophagus joins the stomach, there is a circular muscle called lowed esophageal sphincter which keeps contents of the stomach from returning up toward the esophagus. When said muscle malfunctions there is return of acid causing the inflammation and irritation of the surface of the esophagus. This condition is called GERD.

What are the causes for GERD?

The most frequent cause is hiatal hernia, a defect in the diaphragm muscle the allows the lower esophageal sphincter to relax and open. Other causes are alterations that cause a delay in the emptying of the stomach or small intestine. Some risk factors are obesity, smoking, alcohol, coffee, pregrancy, and some medications as are anticholergenics, bronchodilators, and anti-depressants, among other.

What are the symptoms of GERD?

The main symptom is heartburn, or a burning sensation on the chest. Other frequent symptoms are burps, pain, or difficulty swallowing or passing food into the stomach, as well as regurgitation. There can be nausea, coughing, hiccups, hoarse voice, and frequent ear and throat infections. The symptoms may worsen when the patient is laying down.

What are the complications?

How is it diagnosed?

An endoscopy is the most definitive diagnostic tool as it can reveal the cause and severity of the damage, as well as any complications. It is also possible to take biopsies, or small tissue samples, of the affected tissue in order to make a specific diagnosis of the current conditions of the esophagus and of possible complications as are Barrett’s esophagus or even esophageal cancer.

Endoscopy of a normal esophagus at the level of the escophago-gastric junction.

Esophagitis with ulcers as consequence of GERD. High definition image under white light.

Other diagnostic tests include pHmetry, in which the frequency of gastric acid return to the esophagus is measured, and esophageal manometry, which measures the pressure of the lower esophageal sphincter. 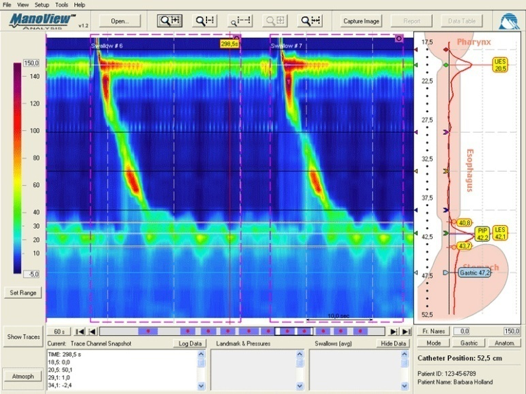 What is the treatment?

It is necessary to undergo changes in life style as are increase in water intake, daily aerobic exercise, modify the diet and eating schedule, as well as reduce weight. These modifications can reduce the symptoms of GERD. Medications that cause inflammation in the stomach must be avoided. Specific medications will be prescribed depending on the severity of the damage caused by GERD.